3 poems from a poetry group I run at a Worcestershire care home. The first 2 were brought to the session, on 2nd October 2014 (National Poetry Day UK) having been written beforehand.

What mysteries are we to have this year?
What buds lie beneath the carpet of colour?
What plants will appear in the future dawn?
What animals will hide and live here?
Only to reappear with the dawn of the new year

How long will this season last?
Will it be short and crisp?
Long wet and dreary?
Or merge into yet another icy blast?

Don’t go down that way, Dee
Live your life today
Thoughts are sad but life is sweeter
Live it, live for today

People are kind but they’ve all known sorrow
Dear people, live your lives today
Chin up, shoulders back, there’s always tomorrow
The sun is shining, LIVE FOR TODAY!

The third poem is a tetractys written by the whole group at the session:

The River Stour by Roger Mathews
“The metre is designed to give the feel of the momentum of the river’s fast flow.”

The River Stour
by Roger Mathews

Born high up in the hills of Clent,
The river Stour makes swift descent,
Into the clamour of Black Country toil,
She wends her way, pure water to spoil.

Around to the west by Stourbridge glass,
now turning south, through meadow green grass.
Here she meets ‘Old Brindley’s Pride’,
And with the canal, they run side-by-side.

Past Kinver church and Cookley too,
Sandstone cliffs come into view.
Horsebrook and Honeybrook join the fun,
The winding course will soon be run.

At Kidderminster, while passing thru,
Her water is coloured to many a hue,
With shades of yellow,green and brown,
By dye-stuffs from the carpet town.

Down at Stourport’s busy marina,
their waters swell the great Sabrina,
Whose current strong and running deep,
Appointment with the ocean keep.

Un-sung now, the lowly Stour,
She once gave rise to industry’s power.
Though time moves on to another age,
Stour’s glory remains – on history’s page !.

Memories of a Draw Boy by Eric Harvey

“This poem is about as historically correct as I can get it! A Draw boy in the 19c is what we would call a Creeler today. They were taken out of school at an early age (8 to 10 years old) and often away from their families to live with and work for the Weaver. When boys weren’t available, girls were enlisted. This was considered a dangerous practice because as the young girls matured they would be subject to sexual attacks from Weavers. Loom shops were basically large sheds with four to 16 looms in each. Weavers would try to get a piece finished for ‘Fall day’ which was payday.”

Memories of a Draw boy

ALONG STOURBRIDGE STREET THROUGH THE BUSTLING HORSEFAIR
WHERE THE CRIES OF THE HAWKERS FLOATED ON THE BREEZE
THROUGH ANKLE DEEP MUD, HORSE MANURE EVERYWHERE
PAST THE BEGGARS AND VAGRANTS PITIFUL PLEAS

I WAS JUST TEN YEARS OLD, TWO YEARS OUT OF SCHOOL
JUST A LAD WALKING DUDLEY STREET
MY YOUNG BONES ACHING ON A DIET OF GRUEL
IT WAS FIVE IN THE MORNING, I WAS DEAD ON MY FEET

DOWN HALL STREET INTO MILL STREET ON AND ON
TILL THE DULL LIGHTS OF THE LOOM SHOP APPEARED
UP WORN CONCRETE STEPS, HANDRAIL LONG GONE
THROUGH THE CREAKING OLD DOOR I VEERED

UNPAINTED WALLS COATED WITH FINE YARN DUST
THE WREAK OF URINE, STARCH, UNBEARABLE SMELL
I HATED THIS PLACE, BUT IN GOD I MUST TRUST
TILL I TOO WAS A WEAVER WITHIN THIS HELL!

AN EMPTY SHUTTLE FLEW PAST THE SIDE OF MY HEAD
TWAS MONDAY MORN AND MY BOSS HAD SPENT THE NIGHT
IN THE FREEMASONS ARMS, AND HAD NOT SEEN HIS BED
‘COME ON YOUNG JACK, YOU’RE WASTING MY LIGHT’

HE WAS STILL DRUNK BECAUSE OF FALL DAY
THAT WAS PAYDAY FOR MY WEAVER AND I
IT WAS ALWAYS ON A THURSDAY AND SATURDAY
WHEN MISSED I’VE SEEN GROWN MEN CRY!

WE WOVE NEAR TWENTY FIVE YARDS A WEEK
MY WEAVER GOT ONE SHILLING A YARD
HE PAID ME FOUR SHILLINGS, HIS LITTLE PIPSQUEAK
WHICH I TOOK HOME TO MOTHER AS TIMES WERE HARD

WE’D CARRY IT TO THE FACTORY FOR INSPECTION
AND, IF IT WAS ALRIGHT HE GOT PAID
BUT IF ANY SMALL THING NEEDED CORRECTION
WE HAULED IT BACK AND I GOT FLAYED

SO EVEN THOUGH POOR, OUR BLESSINGS ARE COUNTED
THERE ARE OTHERS MORE WORSE OFF THAN US
AND PROBLEMS ARISING ARE ALL SURMOUNTED
WITH NO HEARTACHE, NO PAIN AND NO FUSS 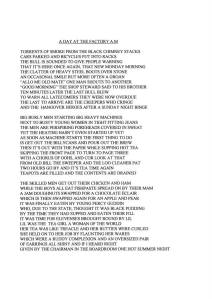 A Day at the Factory a.m.
by Eric Harvey
Click on photo to enlarge 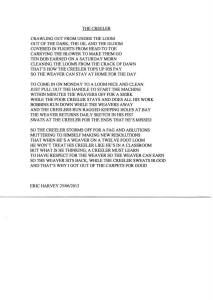 The Creeler by Eric Harvey
Click on photo to enlarge

When it went at 7:20, we’d jump into the car,
my Mum started work at half past, and it wasn’t very far!
She was at Quayle and Tranter, they were on the edge of town,
but Brinton’s Bull was fabulous, it never let us down!

I was born in Kidderminster, married in one of its Churches, and lived there until the late 1970s. On the 30th of April this year I was invited as a guest to the Carpet Museum in Green Street, and memories flooded back.

I lived at 7 James Road on the outskirts of the town with my parents and grandparents. My mother had worked at Carpet Trades Limited in the Stamping Room before marrying my father, when, as was required at that time, she had to leave her job to look after her husband. My grandfather was foreman in charge of the Axminster Shed at that company. Just up the road at number one lived my Uncle Arthur Youngjohns who was the Colourist at Tomkinson’s Carpets, and just round the corner in Hurcott Road, in a big white house with a large garden lived my Uncle Arthur Perks, who was Works Manager at Adams’ Carpet Company. For a short time I worked in the offices of Brintons Carpets. This was typical of most families in Kidderminster, which was the centre of the world’s carpet manufacturing industry.

When anyone bought a new carpet and showed it to a friend, the usual reaction was for them to bend down to look at the back to check the weave and quality. Wilton was the finest, whichever firm it came from. It was a tight weave of worsted yarn with the pattern showing through at the back, and would never wear out. Axminster, on the other hand, had a jute backing and could vary in quality, according to the knots [or tufts] to the square inch.

The reason for my invitation to the Museum was really in honour of my wife. Olga came from Leeds to the College in Kidderminster to lecture in Art and Design. She immersed herself in the predominant carpet industry, and made herself known to the “Carpet Masters” and Head Designers in all the factories. She developed a “Diploma in Carpet Design”, which became the qualification for employment in studios throughout the industry. Then she proposed the unthinkable – a B.A. degree in Carpet Design. By this time she had been appointed Head of the School of Art with a staff of twenty lecturers, having responsibility also for Music, Physical Training, and several other subjects no others would accept, including Coastal Navigation. As no Further Education Colleges offered degree courses, for more than two years her efforts were relentless with inspections, submissions, and endless meetings with influential personalities. Eventually, the Minister of Education, then Shirley Williams, carefully considered the proposition, and is reported to have said “Yes, we must do this”. Students came not only from all the British companies, but also from carpet producers all over the world. U. S. A., Europe and the Middle East.

The reason why I was invited to visit the Carpet Museum, which has only recently been opened, was that I had donated all Olga’s books, documents and lecture notes, including carpet samples and projector slides which she used. They are now available as archives for anyone wishing to research carpet design and manufacture. I was collected from home by an old friend and one of her staff, Cynthia, and greeted by Jill who was at one time the College librarian and is now in charge of the Library and Archives at the Museum. They have two working looms, and many activities in which visitors can participate, such as producing designs and examining carpet yarn under a microscope. I met several people from the industry who reminded me of our past, and looked at photographs of people I had known. It was a day of emotion and memories that will remain with me for the rest of my days on earth.

My dad was a tuner – what do you think of that ?
He went to work to mend the looms – in an old oily hat !

My granddad was a dyer – and he would always swank
That when he “died” his work lived on – in a brightly coloured hank !

Granny was a winder – and she remembers sobbin
When short time prevented her – from winding up the bobbin !

Great-granny was a spinner – and she could do no harm
When combing out the woolen fleece – to make a carpet yarn !

Her husband was a shearer – always on the hop
To cut out all the problems – and shear a level top !

The misses was a picker – and often huffs and puffs
About time spend on the carpet – sewing in the tufts !

Uncle was a weaver – and he would hum a tune
When pulling in the handle – and starting up the loom !

Auntie stamped the cards – but not in her backyard
Because they were needed – on the pattern Jacquard !

My young cousin labours in the sheds – and he’s put out a feeler
To be put on the list – he wants to be a creeler !

Our neighbor worked in the office – it sometimes took him ages
To count up all the money – and put it in the wages !

My brother sold the carpet – it never was a joke
Without him in the showroom – the company could go broke !

Our children wonder what to do – the industry in decline
It’s hard to give the best advice – but they will get on fine !

And so we do our best – to keep things alive
By volunteering at the Museum of Carpet – and in the Archive !

So, join the family, be a friend – it’s written on the page
That people like us – are part of herit-age !