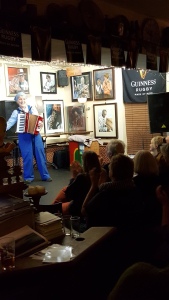 The Alarum Theatre tour is about to reach its half-way point with a show at Two Towers Brewery, Birmingham, 7.30pm on Wednesday 25th April. We will then have left the Worcester & Birmingham Canal.

I thought now would be a good time to share a new poem I have performed at every show, until now. Once we’re on the BCN (Birmingham Canal Navigations) I won’t be including it any more as much of the material in my half of the show relates to the areas we are passing through.

On the Worcester and Birmingham
in nineteen forty one,
a week’s trial – a trial it was
in more ways than one.

Confused and bewildered
I joined a team of three.
Daphne March and Molly Traill
set out to educate me.

‘Boats not barges.
Boaters not bargees.’
At seven feet wide by ten feet long,
the cabin’s quite a squeeze.

how I’ll sleep on the side bed –
two feet wide, no more –
with Daphne on the cross bed
and Molly on the floor.

On the Worcester and Birmingham
in nineteen forty one,
a week’s trial – a trial it was
in more ways than one.

Confused and bewildered
I joined a team of three.
Daphne March and Molly Traill
set out to educate me.

During my research for The Ring Project, people have been very generous with their time and memories and by sharing photos and archive recordings. As well as these, I have received one rather unusual gift. Can you identify this mystery object, given to me by John Burman? The answer appears at the end of this post. 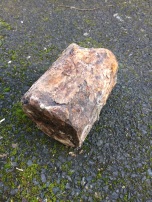 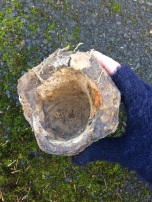 One of the outcomes of my research will be a small book of poems with photos from Max Sinclair’s collection. My aim is to bring to life the activity that went on to restore the Droitwich Canals and show what the area was like before the work was done. You may wonder how I will do this through poetry. One method is to use words I find. 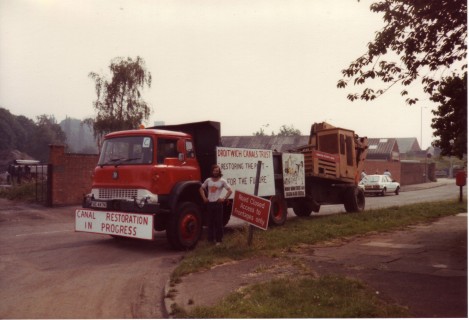 This photo from Nick Yarwood (via Tony Brannon) is a perfect example. It features Nick Wright with Droitwich Canals Trust’s ‘work horse’ pulling the Smalley 15 digger belonging to the Waterway Recovery Group. Nick told me it was a most unusual sight in the 1982 Droitwich Carnival procession.

RESTORING THE PAST FOR THE FUTURE is a great slogan. Both the photo itself and the cartoon on the lorry raised a smile:

MOMMY MOMMY THERE’S A MAN
DIGGING IN OUR DUSTBIN

David Turner talked to me about working as a volunteer, shaping sandstone blocks. He sent me some photos and I’ve pieced together a ‘found’ poem using words he said in his interview. The slideshow also includes 2 pics given to me by Bill Lambert.

There’s also poetry to be found in the newspaper … I extracted a few lines from an article ‘Barren canal could be source of ‘liquid gold” in the Worcester Evening News, 14th June 1966. Apologies for the quality of the photo which I took having grappled with a microfilm reader in The Hive, Worcester. 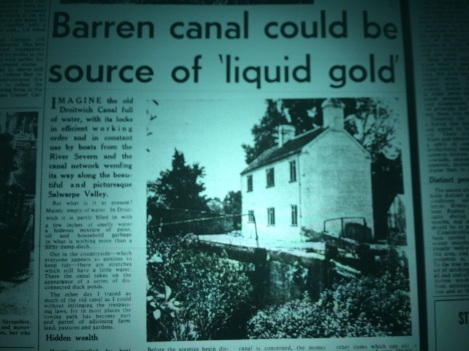 A few inches of smelly water,
a hideous mixture
of paint, oil and household garbage
nothing more than a filthy damp ditch
and disconnected duck ponds.

There’s a hidden wealth of beauty
along the Salwarpe valley …

(the words of Bob Clarke)

Included in my previous blog is a photo I took of the culvert under the canal at Salwarpe. Nick described to me in detail the work undertaken by volunteers, and after he and I did our walk along the canal I acquired Nick’s photos. I’ve added my own again at the end of these to show the finished job as it is today. 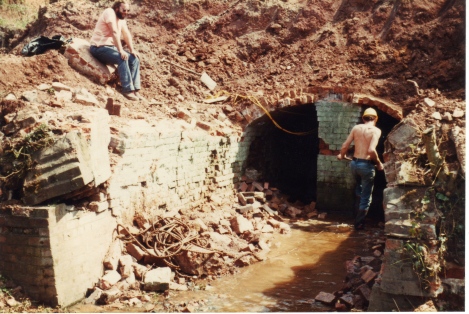 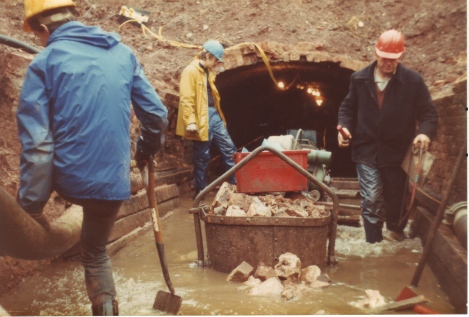 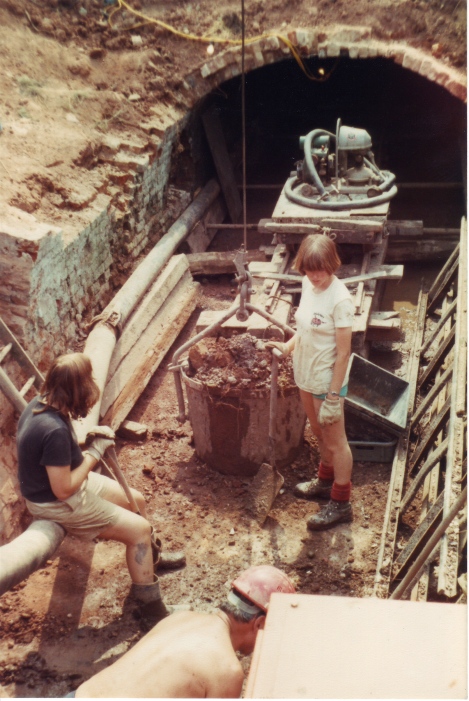 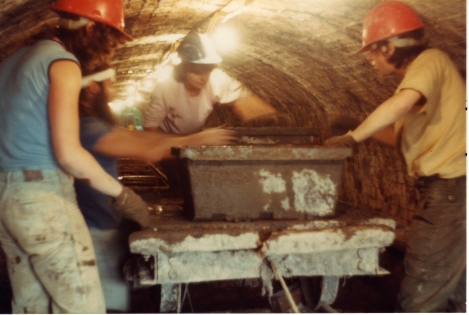 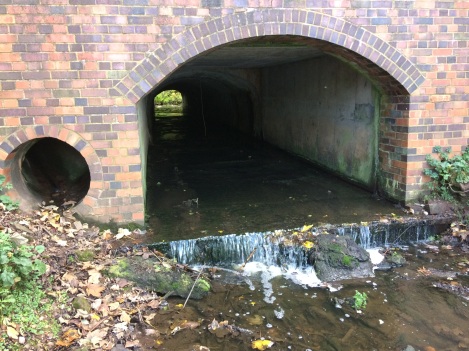 As promised, I will leave you with the answer to my question, in the words of Nick Yarwood: “At the heal of each lock gate there’s a cast iron pin about which the gate pivots. It engages in a cast iron socket set into the cill.”

This is probably the only one that’s left and it’s looking for a new home …. 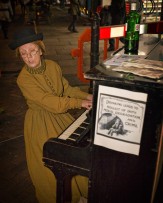 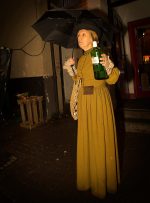 I was booked by the inventive Kate Cox, Clik Clik Collective Producer, to be part of an installation and walkabout in Worcester city centre at the end of November. A striking feature in Worcester Victorian Fair, the installation celebrated the darker side of Victorian Britain in an alleyway with debauched inhabitants, cast out of society due to their unsavoury behaviour! My response to the brief was to hold a mock temperance meeting with this motto: 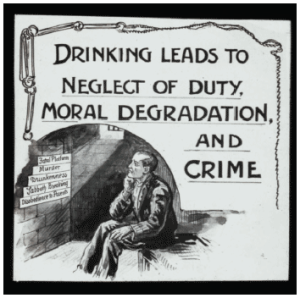 I researched temperance songs and speeches and put together an interactive programme lasting about an hour and enjoyed seeing how people reacted. Several people entered the spirit of it (haha) and joined in with the singing and play acting. One bloke pretended (well I think he was pretending!) to have a go at nicking my gin bottle which I assured everyone had been filled with water: “I have poured away the vile liquid this bottle once contained and replaced it with cool, clear water!” For, as the song goes:

There’s nothing so good for the youthful blood,
Or sweet as the sparkling water.

I invited people to sign the pledge and lots of people did, though ironically the pledge got soaked on the second day when there was a heavy rain shower. I had mixed feelings about the fact that an 8 year old signed after I showed her family the authentic signature of a 7 year old: 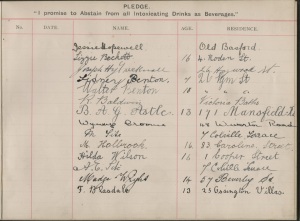 It was very rewarding putting this show together and I’d love to do it again, so I’m looking out for opportunities. Do contact me if you’re interested or have any suggestions for venues or organisations that may be up for it. I’m working on a version which doesn’t need piano, though it would be great to have one.

Working for Clik Clik Collective gives me the opportunity to come up with new ideas and try them out. Producer Kate Cox is pictured below. I love what she does; there’s a feeling of authenticity and humour in this work, which is always high quality, and you couldn’t wish to meet a nicer group of people. 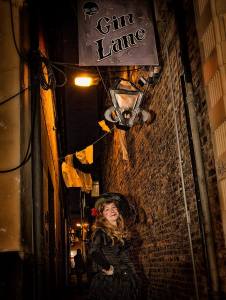 This year I’ve watched or been involved in several theatrical encounters on the streets of Worcestershire. Having seen some brilliant performances in August at Kidderminster Arts Festival (see link below) I got the performers-eye view in a KAF commission, How do wars start? with Worcestershire Poet Laureate, Fergus McGonigal.

To find out how it went see our Facebook page  https://www.facebook.com/how.do.wars.start

Also in August, I was booked by Clik Clik Collective (see link below) to wander the streets of Worcester as Black Country Pat, engaging people as I saw fit, for the Worcester Music Festival. I chatted to lots of people and sang songs. 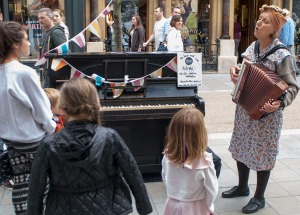 Last Friday I was with Clik Clik again at Worcester’s Victorian Fayre delivering poetry near the site of Hill Evans & Co Vinegar Works which closed in the sixties. My repertoire consisted of humorous and informative poems about vinegar I’d written specially for the occasion in a Victorian style plus pieces by little known Victorian women poets and Edward Lear. 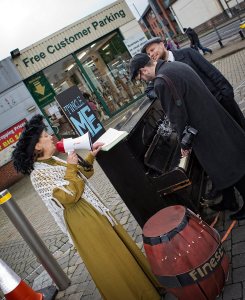 Engaging the public at such events can be exceedingly difficult. (As you can see, I resorted to post-Victorian equipment.) People with their minds fixed on getting from A to B keep their heads down, determined not to be lured into any form of enjoyment. Is the chugger partly to blame for this? Discuss.

Here are some of the responses I got to the question, Can I read you a poem? 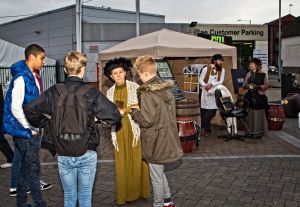 When 3 teenage lads approached I offered, in a very posh voice, to read them a poem and they said yes please, listening with mock interest. I read a short piece by Amy Levy and one of the lads said, earnestly, that she was one of his favourite poets and agreed that it was tragic that she committed suicide at the age of 27. He asked for more poetry, so I turned to another lad and directed this to him:

I DO not love you very much,
Only your tuneful voice,
Which, in a happy moment, takes
The music of my choice.
I do not love you, dear, at all,
Only your merry ways,
Which linger in my mind, and set
Me dreaming through the days.
In truth, I think it is dislike
You kindle in my heart,
Because you come so joyously
To steal so large a part.

He listened intently. “So you love me then”, he said when I’d finished. I walked away, “blushing”. Then the Anti Barber lured him into his chair and drew a moustache which made him look like Lionel Richie and broke into anachronistic song to uproarious laughter. Later I gave a spoken rendition of The Lost Chord by Adelaide Anne Procter to improvised piano accompaniment by a fellow Clik Clik entertainer called Dan. Is it mad? Is it art? Does it matter? Who had the most fun?

The very first image which sparked off my interest in writing about Kidderminster and the carpet industry was one presented by Melvyn Thompson during a tour of the town. He talked about dyes from the various factories combining their colours in the River Stour. Very recently I was sent a poem about The Stour which includes that image so I have added it to the collection of writing by others on the Your Stories page, with thanks to Roger Mathews.

Since we’re on the subject of rivers, I wrote a piece recently which refers to the flooding issues along the River Severn. It also collects together quirky quotes from TV weather presenters. The verses are spoken and the chorus (in italics) sung. I sang it at Mouth and Music (www.mouthandmusic.co.uk) and hope to perform it again some time!

There are a few teething problems with Spring.
The winds are up to no good
and there’s some unctuous warm air
– a weather sandwich.

The barriers are up in Bewdley,
Worcester racecourse is inundated,
the long range weather forecast
is for a 6 week hose pipe ban

so there’s no need to dredge the rivers
and there’s no point clearing out the bridge holes,
water water everywhere
and no-one will carry the can

It’s all down to global warming
that the ice is melting in our greenhouse,
the shifting winds will blow your house down.
Blame the weather man.

The sunshine’s been in the shadows.
There’ll be rain romping in from the west on Wednesday;
It’ll be a real windscreen wiper of a morning.
There’ll be a psychedelic storm followed by some cool days.

We’ve got weather in the forecast today.
It’s going to throw lots of things at us.
The showers could be quite punchy
but we’ll be shoe-horning in some sun.

There’ll be some usable weather flirting with the south coast –
crisp, cold and deliciously sunny.
In the Midlands there’ll be a disappointing fog
and some clearly not helpful rain.

Today will be jam packed with plenty of weather;
I’ve been going mad with the crayons!
It will be colder than the figures on the weather map
due to cold air.
It’ll be 10 degrees. But it will feel like 9.