To inspire my writing for The Ring Project, I took a stroll along the Droitwich Canal with Nick Yarwood who was involved with its restoration as a teenager, and later as a Canal Manager. As we looked down from Salwarpe Bridge, I imagined the “wet mud, silt, dead trees … years of debris”, Nick described, my imagination helped along by one of Max Sinclair’s photos, taken in 1965. When the painstaking restoration work began, this is what the army of volunteers were confronted with.

I had already been told by another interviewee that many of the locals weren’t keen on the canal being restored because they thought all sorts of riff raff would be marauding around, up to no good!

Under the bridge, holes made when it was constructed are clearly visible today, and the original wood is still there. 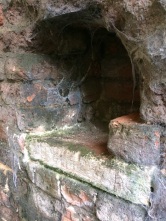 At the first event, the Droitwich Dig in 1973, a thousand people turned up. Nick was one of those people, aged fifteen. He tried to work out the location of Max’s photo and stood there for this shot:

As we moved from location to location, Nick described the work undertaken by the volunteers. In order for volunteers to repair this culvert under the canal, the stream was diverted through pipes. Anyone walking or cruising along would be unaware of all the work that went into this hidden brickwork. The site of Hill End swing bridge may go unnoticed, but the towpath edge was replaced by volunteers though the bridge itself is lying redundant on the towpath.

Restoration includes preserving features like this sandstone, reminding those who look more closely that horses once pulled boats along this waterway. 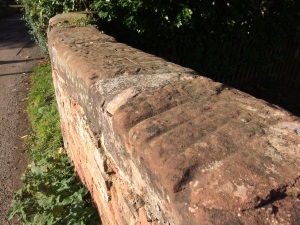 John Burman, who was Chair of Droitwich Canals Trust for about 10 years, said this about the parapet of another bridge:

When we did Linacre Bridge, a nice bit of work, the coping stones were donated by Cadbury’s. When they were put up, we went to a local farmer and asked for buckets and buckets of slurry – which he was very happy to let us have – and we poured the slurry all over these coping stones for two reasons: One, so that moss would grow and two, more importantly, the vandals won’t try and write their names in it because they don’t want to get their hands dirty. So you don’t get people scratching their names into clean sandstone thereby damaging it.

The canal was officially abandoned in 1939 at the start of the war. The old bridges were too steep and lightweight to accommodate tanks, so this provided an excuse for an act of parliament giving the government official permission to let it fall into disrepair. Gradually over time, sections were built over and some parts were incorporated into people’s gardens. Nick described  vividly how the workforce collaborated to clear the canal of “years of debris” and I will be writing more about that soon. I’ll end with a story he told me.  In one section, a local man had erected a fence along the middle of the canal bed and planted a line of willow trees. When work began to remove the willows he protested. “They make cricket bats out of those you know!”