On Remembrance Sunday, I am very pleased to have been able to highlight the role the Women’s Training Scheme played in the war effort on the British canals. The work I have been doing with Alarum Theatre, telling the stories of these mainly middle class women, will feature on BBC Countryfile this evening at 6.20pm on BBC1. Also included will be Kathryn Dodington whose aunt Daphne March (Daffy) carried cargo throughout World War 2 on her family owned boat, Heather Bell. As Kathryn told me, Daffy’s motivation for doing this work was ‘service’. It is also important to remember the women of the working families who didn’t have the choice; this is what they were born to, and they just got on with it. Our show Idle Women of the Wartime Waterways gives an insight into the lives of all these women.

In remembrance of the working women today, I am sharing a few lines from my piece Hillmorton Locks. This section was written after speaking to Ron who told me the story of his birth:

Emma Humphreys, expecting twins,
a boat-load of coal, her labour begins,
the war is on, the shrapnel flies,
the cabin’s tiny, her youngest cries.

Two men to thank, Albert and Ron
make sure they’re safe till danger’s gone;
under a bridge, twin boys are born,
named after the men who saved their skin.

At the end of October I spent the day filming for BBC Countryfile with Kate Saffin for a feature on The Idle Women whose stories we re-tell as touring company, Alarum Theatre. The programme is being aired on BBC1 this coming Sunday at 6.20pm. Here’s how the day went.

We assembled in the Museum cafe at Stoke Bruerne at 8.45am on a cold but dry day, and it was decided that the first job was to film me performing two of my poems – Idle Women and Judies and Heather Bell. The second of these was chosen because it’s all about Daphne March whose niece Kathryn Dodington was also being filmed for the programme. She didn’t have far to walk because she lives in one of the canalside cottages. Mind you, she had already got the fire going on Sculptor, ready for our trip down (and up, and down, and up) the locks once the poems had been filmed.

Idle Women and Judies
Here you can see Ian with the fluffy microphone, Steve behind the camera and Simon, the producer, looking down at the shot as it is being filmed. 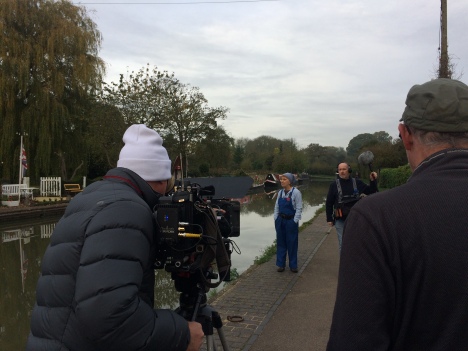 We waited in vain for an intermittent and rather loud noise coming from the other side of the towpath and eventually had to abandon filming in this location. The poem was recorded later in the day on board Sculptor with Kathryn nicely positioned in the background as she steered. Sadly, neither of the poems made the final cut because there simply wasn’t enough time to pack everything in.

Having shown presenter Ellie Harrison how to work a lock (she was completely new to this) we chatted to her on board Sculptor as Kathryn steered through the other locks with a crew of Canal & River Trust volunteers. Kathryn was a stalwart, winding the boat (ie turning it round) then steering it up the locks again. While one of the volunteers took Sculptor off and winded it again we stopped for lunch (and to warm up) in the Museum cafe. After lunch we set off down the locks again, leaving the boat once we had finished recording so that we could get to Enslow for our evening show and the crew could focus on interviewing Kathryn who had some wonderful stories to tell. In case you’re wondering, the blue barrel in the hold is ballast. This is where the heavy cargo would have been.

All in all we had a really good time. Thanks to lovely researcher Debs for sending us the photos! And thanks to Canal & River Trust, Kathryn Dodington and the hardworking volunteers for making the day possible.

Error: Twitter did not respond. Please wait a few minutes and refresh this page.