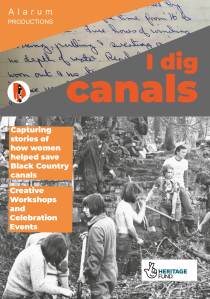 Back in 2015, I wrote a blog, which gets regular hits, called Found Poetry – 3 ways. It shows ways of creating poems using other written pieces.

On Thursday 13th February 10:00-1:00 I’m running a workshop which will include writing from found sources, both written and oral. The location is unusual – a (stationary) narrow boat moored on the canal near the historic Dudley Tunnel.

Many of today’s canals would have been lost had it not been for a group of dedicated campaigners. The phrase I Dig Canals was a campaign slogan in the 1970s when the word ‘dig’ had a double meaning. Reading today about that period, you would think only men took part in the work to save the canals, but of course women were there too. The I Dig Canals project was set up by Alarum Theatre, supported by the National Lottery Heritage Fund, to unearth hidden stories about women’s involvement in these campaigns in the Black Country in the 1960s and 1970s which I remember from my childhood and teenage years. Here I am on our family-owned narrow boat Laurel, an ex-working boat.

The Workshop will take place on board The Vic Smallshire, Dudley Canal & Tunnel Trust, 501 Birmingham New Road, Dudley, DY1 4SB. Participants will use oral history recordings, written accounts and documentary sources such as magazine articles to create poetry or prose pieces that capture the essence of the stories. The workshop is free of charge and those attending will be invited to perform their work at the final project celebration on Saturday 4th April at 6pm at Dudley Canal & Tunnel Trust. Some of the work created will also be included in a book.

To book, email Nadia Stone, Project Manager idigcanals@alarumtheatre.co.uk. Click on the link below for the I Dig Canals flyer with further information.