Years ago I went on an organised walk along the then disused Droitwich Canal. Following the course of abandoned waterways can be quite tricky as they are often hidden under roads and buildings. Walking the canal again recently, so that I could write about its restoration, as I walked down the locks from Hanbury I had no idea that the canal had been moved over, the original route being hidden under people’s gardens. Alongside the locks, there’s a hedge between the towpath and a very busy road. That hedge separates two worlds – the ‘rat race’ and the ‘slow lane’. I chatted to a volunteer lock keeper who told me that working on the canal is his “safety valve”. You can see him on this photo standing by the top gate.

In order to fulfill my writing commission with The Ring Project, I am doing a series of interviews with people who became involved with the mammoth task of restoring this canal. I have memories of my own of what’s involved in canal restoration, and I’m learning a great deal about the Droitwich Canal from doing these interviews and reading various documents, in print and online, including fascinating canal guides produced by Droitwich Canals Trust at intervals during the restoration process.

Having read in this article by Max Sinclair https://worcestervista.com/index.php/boats/droitwitch-barge-canal/ about a barge kettle which was found during the dredging process, I wondered if anything of value was found in the undergrowth or canal bed. So far, the answer is no. Here’s an extract from an article, again by Max, in the 2001 Guide: ‘After we cleared the mud out of lock 4, we started on the paddle holes …. Secretary, Nick Grazebrook saw what he thought was a silver cup under the water and put his hand in to retrieve it. Suddenly he let out an enormous yell when a four-foot eel leapt out of the water and the whole pit was writhing with smaller eels. As it was getting dark we left it to next morning only to find they had all migrated across the towpath into the Salwarpe.’

Volunteers did however find buried treasure by way of a historic hinged gate that Brindley had fitted in the bed of the canal, which would rise in case of a breach. The pressure of the water remaining in the canal would keep the gate tightly sealed and stop the water escaping. This old swing bridge (see below), no longer required, was not discarded, but placed on the towpath. When in use, it revolved on bearings made from cannon balls, said to be the first recorded use of ball bearings.

I was amused to find accounts of visiting journalists who were reporting on the project. In 1978 John Noakes was invited with his dog Shep to help volunteers clear mud from Mildenham Mill Lock for his BBC programme Go with Noakes. (See above link.) He arrived in new overalls, wellington boots and a hat. Having persuaded him to enter the lock, the producer was not happy with his pristine appearance and ‘after a whispered word with the navvies it was arranged for someone to slip and fall on him so he emerged the right colour’. This photo was taken by Max that day.

In the 2001 Guide, Max describes how the BBCs Tony Francis, then a young reporter, ‘stood on the bed of the newly cleared canal, in a three-quarter length suede coat, conducting an interview as he slowly sank to his middle in mud.’

Behind all these stories there are a huge number of dedicated and hard working people. For example, the first big dig held after the formation of Droitwich Canals Trust in October 1973, known as The Droitwich Dig, attracted a thousand people! Through exploring various aspects of the canal – bridges, hedges, locks etc – I would like to bring to life the activity that went on to turn the dream into reality. Here’s a page from one of Max’s photo albums: 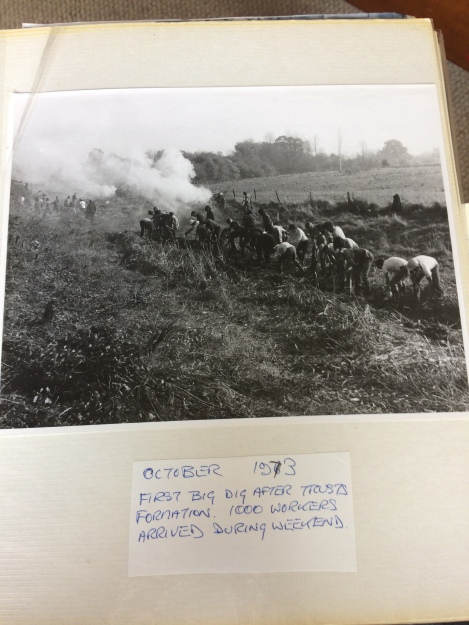 Finally, here’s an extract from a conversation I found in an online forum:

“Many years ago I went to the Droitwich Dig. I had great fun felling larger trees than I had had to tackle before, but what struck me most was the large number of navvies wielding shovels and digging away for two days in the bed of the canal. I remember thinking that if they had all contributed a small sum to hire one machine much more would have been achieved.”
T

“Yes, sometimes this is the case, but people go navvying for FUN – group activity, socialising, and lots of fresh air and beer.  Compare this with 22 or so people pursuing an inflated pig’s bladder up and down an almost equally muddy field, when a result could as easily be obtained by tossing a coin. Or driving boats down a muddy channel, when they could get there more cheaply and quickly by bus.”
P

After our successful 50-show summer tour, Kate Saffin and I have put together a short run of performances of Idle Women of the Wartime Waterways in and around Oxford at the end of this month. See below for dates. Here’s a review to whet your appetite:

“Both women are exceptional storytellers, their performances brimming over with personality”   London City Nights 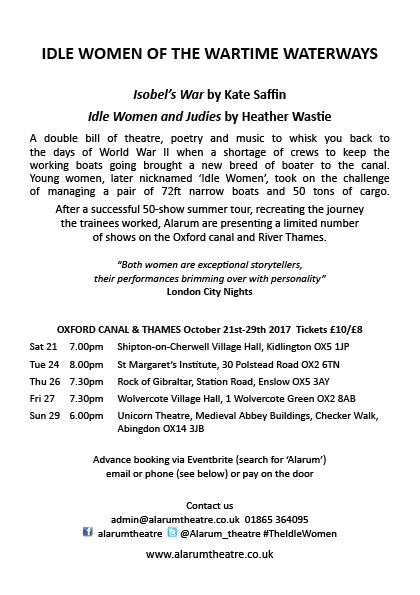 I regularly take my poetry and songs to dementia cafés organised by the Alzheimers Society. We chat about a whole range of subjects – gloves, cooking, vinegar, hair – you name it! And often I go away and write something inspired by what we talked about. Sometimes the poems are humorous and sometimes serious. Here is a serious poem I wrote last week based on words spoken. It started to form in my head as I walked round a park near where the sessions are held:

No more buzzing of bees
No more rainforest trees
Ah, that was after my time

We can’t see the sun
And the ice has all gone
Ah, that was after my time

No more footprints, no more sand
No more green and pleasant land
Well, that was after my time

We traded earth for speed
We didn’t see the need
Well, that was after my time

No fish or polar bears
but I ask you, who cares?
I don’t know, that was after my time

No more rivers, only flood
We would stop this if we could
But you see, that was after my time